Douglas Fir is dimensionally stable and universally recognized for its superior strength-to-weight ratio. Its high specific gravity provides excellent nail and plate-holding ability. The species also enjoys a documented superior performance against strong forces resulting from natural phenomena such as winds, storms and earthquakes. It is truly the ideal structural and general purpose wood for framing lumber in residential, light commercial, multistory and industrial construction.

Douglas Fir (Pseudotsuga menziesii) is not a true fir at all, nor a pine or spruce. It is a distinct species named after Archibald Menzies, a Scottish physician and naturalist who first discovered the tree on Vancouver Island in 1791, and David Douglas, the Scottish botanist who later identified the tree in the Pacific Northwest in 1826. When architects and engineers look for the best in structural lumber, their first choice repeatedly is Douglas Fir. It is dimensionally stable and universally recognized for its superior strength-to-weight ratio. Its high specific gravity provides excellent nail and plate-holding ability. The species also enjoys a documented superior performance against strong forces resulting from natural phenomena such as winds, storms and earthquakes. It is truly the ideal structural and general purpose wood for framing lumber in residential, light commercial, multistory and industrial construction. The Douglas Fir/Western Larch species combination has the highest modulus of elasticity (E or MOE) of the North American softwood species. This is the ratio of the amount a piece of lumber will deflect in proportion to an applied load; it is a reflection of the species’ high degree of stiffness, an important consideration in the design of floors and other systems. In strength properties, Douglas Fir/Western Larch has the highest ratings of any Western softwood for extreme fiber stress in bending (Fb); for tension parallel-to-grain (Ft); for horizontal sheer (Fv); for compression perpendicular-to-grain (Fc); and for compression parallel-to-grain (Fc//). These physical working properties, as well as to the moderate durability of its heartwood and its excellent dimensional stability, provide the reasons many builders use Douglas Fir as the standard against which all other framing lumber is judged. It is also tight knotted and close-grained, adding the bonus of beauty to its structural capabilities. Read More About Douglas Fir at WWPA 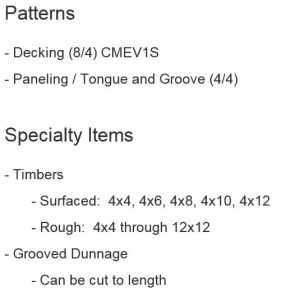 What Our Customers Say...

“I deal with Thompson River Lumber weekly.  The quality and service we receive has served us well.  I look forward to long term business with the crew at TRL.”  -Dennis B.
“We buy lumber from Thompson River Lumber because our customers demand quality and that is what we get from TRL” -Brent H.
“We have had nothing but good experiences in dealing with Thompson River Lumber.  From the ordering process, to the on time shipments, to the quality product, Thompson River has met or exceeded all our expectations.” -Luke W.
“I have been buying lumber from Thompson River Lumber  since 2007.  It has been a pleasure dealing with them.  They are very service oriented.  I always know that the product is what it has been represented to be.” -Joan M.
“I buy a fair amount of Product from TRL and am always satisfied with the quality and timely fashion of which it is produced. My contact is always very helpful to my needs.” -Dennis E
“I have been buying lumber from TRL for over 20 years and the quality of the lumber is better than it has ever been. I can ship TRL stock to my pickiest customers without worry of complaints. -Lonnie B.
I give them two thumbs up! -Dave C.
I’ve enjoyed working with TRL. Great quality lumber and they are great to deal with. -Jeremy H.
I’ve always had great service.  The lumber ships on time and the quality always meets or exceeds my customer’s expectations. -Alan M.
Thompson River Lumber Co.
Physical Location:
241 Airport Rd
Mailing Address:
PO Box 279
Thompson Falls, MT 59873
(406) 827-4311 (Main)
(406) 827-5506 (Fax)
info@thompsonriver.net